Why November's Election is SO Important

I’ve been trying to get this thought out, now, for almost a month.  One thing after another has gotten in the way of its completion.  Yet, I feel it’s vitally important for me to get it out.  Then, last Wednesday following the Scott Walker recall election, I was presented with just the catalyst I needed to see it through.
While out playing music, which is what I do, this local homeless Viet Nam vet came up to me and pushed my button!  “Well, those stupid fucking Democrats really took it up the ass yesterday!”  Now, I’m use to his vitriolic statements.  He’s still at war.  I get that.  I’ve known him for quite some time.  And, his conversations are usually right along that same line.  And, typically, I just listen to his rhetoric, smile, nod, and go on about my day.  It usually works.  Not today.  Today, he pushed my buttons.  He pushed my buttons because he reminded me, up close and person, of exactly why it is of extreme importance for Obama to win in November. 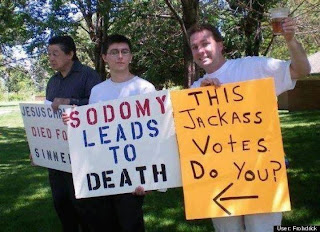 This isn’t about politics, really.  This is about loving and caring.  This is about tolerance.   This is more about right and wrong.  And, it’s about survival.
I want to make it perfectly clear that I’m no professional political analyst.  Not even close.  In fact, the only thing I am, as a professional, is a musician.  I’m a single, gay, black male.  I’m an older black male who was around, albeit as a young boy, when blacks were fighting for their own right to exist.
Our country is entrenched in a cultural war.  That should be no secret to anyone with a pulse.  We’re seeing a second-coming of the Civil Rights movement of the 60s as the LGBT community fight, essentially for their right to even exist.  Just as blacks did in the 50s and 60s.  The parallels are undeniable.
Of course, there are many who would vehemently disagree with me.  Over and over again, I’ve read this older black leader or another protest the notion that today fight for equal rights by the LGBT community is an extension of the Civil Rights battle of the 60s.  I can state as a black man who lived during those times as a young black boy in the South that it is, indeed, the same fight.  In truth, despite their efforts to distance themselves from today’s struggle, it is the same fight being fought against the same establishment.  The same hateful, mean-spirited, bigoted people who wanted to keep Blacks “in their place” 50-60 years ago now want to do the same with the LGBT community.  Well, of course not the same people.  That was a half-century ago.  However, it IS, in fact, the same establishment.  Now, before I get called out on this for not knowing my history, I’m very well aware that there were Democrats and Republicans, alike, who were fighting against Civil Rights back then, whereas today’s war is being waged solely by the ultra right-wing, Christian fundamentalists.  In that day, the political lines were a bit more blurred than they are today.  Today, there is an unmistakable gulf of a line drawn between the two parties.  And, that division has permeated our entire society.  We’re very much a “them and us” culture.  And, therein lies the problem.
Listen, I’m a Democrat, myself.  However, I can readily acknowledge that there’s a lot that Obama has not done during his current presidency.  He’s left a lot to be desired.  I get it.  At the same time, I was realistic enough from the beginning to know that he WOULDN’T be able to do but so much.  Why?  There was no way “they” were going to let a smooth-talking black President show but so much accomplishment.  The Civil Rights struggle of the 60s may have been won in theory, but in reality there are still struggles on the racial front, as well.
Today’s Civil Rights struggle is being fought by the LGBT community, making this the second Civil Rights struggle that I will be directly affected by.  As with the Blacks in the 50s and 60s, all we’re seeking is equality.  That’s it.  Simple equality.  We want to be able to marry the person we love.  Legally.  We want to be protected against discrimination in the workplace and in the housing market.  We want the hate crime laws to protect every single America, which include us.  We want to see an end to the incessant bullying of our LGBT youth, sanctioned legally in some states!, which is leading far-too-many of them to end their lives.  In short, we just want the right to live our lives, as who we are, just as freely as our heterosexual counterparts.  That’s really not asking too much, and it certainly isn’t asking for “special rights” as they try to make you believe.
Why IS is so incredibly important that the current President of the United States win the election this year? The answer is quite simple, actually.  The short answer is if Obama fails to retain the White House, our culture will be doomed back to the days, and ways, of Ward, June, Wally, and the Beav.  It’s that simple.  That’s the utopian world they envision.  That’s the simple answer.  A deeper look reveals a much more disturbing picture.  Failure by Obama to win the White House in November will ensure:

I'm not naive. I understand that there will always be narrow-minded, bigoted people in the world and in our society. However, at this specific point in time, they've risen to positions of power. With that, they've seemingly made it their life's mission to all but do away with anything gay. Indeed, there has been right-wing political and religious leaders calling for the death of LGBT people. They're flexing their political/religious muscle, spewing extraordinarily hateful and intolerant rhetoric to their followers. In doing so, they are creating a very dangerous environment for members of the LGBT community. To wit:
Indeed, Obama losing the election in November would be catastrophic for the LGBT community. Not just because he's gone public in his support for marriage equality. It would be catastrophic because it would put in power the absolute meanest, most narrow-minded collection of "leaders" I've ever witnessed. Giving power to this group of people would take the LGBT community back to pre-Stonewall days. At least! Giving power to them would absolutely assure an escalation in the already-alarming suicide rate amongst LGBT teens. Why? Because they don't care about you if you're LGBT. In their eyes, we shouldn't exist. And, quite frankly, people with this mentality have absolutely no business whatsoever in positions of power.

Honestly, this really isn't about politics, per se.  It's more about right and wrong.  It's wrong for people to use positions of power to systematically destroy a group of people.  To call for the death of a group of people is called genocide.  How is that even legal?  Maybe within the next four years, they'll get some people in their party who actually care about ALL people, including people in the LGBT community.  Maybe that's asking too much.  Well, at the very least, we can hope for a group of people who aren't as mean-spirited as this collection is.  Until then, I think we need to do everything in our power to make sure they don't succeed in November.
Posted by ron kemp at 12:07 AM