The Opposite of Love is Fear 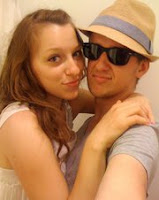 When I wrote about Sophie Miriam Herold's hateful rantings yesterday, "Spreading Hate", the last thing I said was for everyone to send her an email "...to cheer her up."  You may remember that Sophie was the one who said that "homosexuality is abnormal and disgusting."  Well, how many of you sent her an email?  Were you kind and loving in your message?  Or, did "lay into her" in response to her amazing level of...whatever you want to call that rant?  Well, here's what I've learned about Sophie:
Why do I think that Sophie is a lesbian?  She can say it better than I can, in her own words:


I know what I'm talking about, I have had feelings for the same sex a while ago. These feelings were different to anything I've ever felt before. When this person was around me, I felt safe, relaxed, comfortable.

I'm not sure if you know that feeling, it's…you're totally calm, you don't feel the need to prove yourself to the other person, you always find something to talk about and, most importantly, there is a sort of 'basic agreement' between the two of you what means that you don't need many words to communicate with the other person, and when there is silence between the two of you, it's not an awkward silence, it's a feeling of being understood. I could have done what you did: just go for my feelings for the same sex. But I didn't. I cut off contact to this person completely, I even moved to another city and denied all attempts of contacting me.
I mean it was hard, in fact I'm still thinking about this person, almost every day since six months, but I bear with it. You just have to do something in order to distract yourself, you know? Then it works. Not every day, but most the days.

This is an excerpt from one of her "anonymous" emails she sent to someone, apparently a year or so ago.  Reading the whole thing is very revealing, indeed.

What this says, in my opinion, in an attempt to suppress her own lesbianism and, worse, play her "gender role".  At 21, she's accepted that she has to "do what society expects..or suffer the consequences."  To me, that's sad.   Somewhere along the way, someone has beaten her self-esteem down so badly to a point where she doesn't feel she deserves to be happy, that she's put on this planet for one purpose, and one purpose only:  to perform her gender role as expected of her from society.  Personal happiness be damned.  Clearly, she'd found love, possibly even the love of her life.  And, to paraphrase her words, "all was right in the world."  However, she denied herself that happiness.  Her "gender role" is more important.  Now, rather than being happy with herself and with the girl her heart chose for her, she lives in fear.  She's fearful that she'll never find that true connection again.  Sure, she'll find some guy to perform her gender role for, and she might even force herself into believing that she loves him.  The truth will always be the truth, though.  And, the truth, her truth!, is that she's denying herself of the love every human soul craves.  She found it.  But, she moved away from it.

Now, that fear has turned into anger.  Anger at herself for not being true to herself; anger at a society that imposes its beliefs on individual, personal lives; anger at the LGBT community for doing what she's, so far, been incapable of:  loving ourselves and embracing the real love we deserve.  And, that fear has now manifested itself as hatred.  Make no mistake, that's self-hatred we're reading.  Self-hatred that was born of fear.  Sophie writes:


What if all the people in this world just go for their feelings, for what makes them happy? The world would turn into chaos! You have no right to 'simplify' your life by being gay.