How I Know That People Aren't Taking This Seriously

I've been trying to write this one for over a week.  Obviously, other things took precedence.  I had alluded, in an earlier post, that I had just learned beyond a shadow of a doubt that the epidemic we're seeing of bullying and bully-related teen suicides wasn't being taken seriously and that I would explain "...in my next entry."  Well, then all hell broke loose last week, with an explosion of 6 teen suicides in a 48 hour period, and this one got put on the back burner.

So, what happened to assure me that it's not being taken seriously?  I grew tired of waiting for the movie, Bully, to come to a theater near me here in Maryland, so I started checking around to see where I could go to see it.  What I found was discouraging, to say the least.  In the county I live in here in Maryland, the movie is playing at one theater, AND it plays one time per day!  That angered me.  Once I got to the theater, that anger was fused with discouragement.  With a movie of this magnitude being shown in one theater one time per day, one would think that the theater would be packed.  Nope.  Including myself and Marty, there were SIX people viewing the movie.

What I came away with was the reality that, whereas there are obviously those of us who DO care about what's going on, quite obviously there aren't enough people who really give a damn.  And, that in itself gives partial explanation as to why it's easy to get the feeling that not enough is being done.  I came away with the attitude of "not enough is being done because not enough people care!!"

How do we change the general apathy that right now permeates our society as it pertains to bullying and bully-related teen suicides?  I wish I could answer that.  I can't. 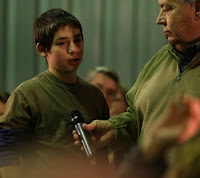 "Bully" is most definitely a must-see movie. (if the scene that this picture was captured from doesn't rip your heart right from your chest, you heart beats icicles.)
Originally, I was going to do more or less a review of the movie.  However, I don't want to do that.  Rather, I want to challenge everyone who has NOT seen this movie to go do so the very first chance you get.  Take your kids.  Take your nieces and nephews.  Take your neighbor's kids!  Call every school in your district and find out if they have a copy of it yet.  If they don't, demand that they show it to the student body immediately.  It's a must-see movie.  It's a must-see movie because it shows a lot of real-time bullying and what these kids are really dealing with.  It's a must-see movie because it shows the tragic aftermath of what families and friends are left to deal with once one of these young people have taken their lives because of the bullying.  It's a must-see movie because it clearly illustrates how officials, from school officials to police officials, thoroughly fumble the whole process of dealing with bullying and its affects.  And, it's a must-see movie because, sadly, two of the real-life characters are already gone.
In the larger picture, the mission here is to make every effort to get people to take this much, much more seriously than it's currently being taken.  "Kids will be kids; boys will be boys".  Try telling that nonsense to the parents of one of these young people who have ended their life because of "kids being kids".  If you were to read some of the things that I've read, if you were to read the cyberbullying posts that one mother of a recent suicide victim shared with the facebook blog page and the pure evil-spirited venom the words contained, it would be clear that the "kids will be kids; boys will be boys" mentality must be eliminated.
The five "characters" in the movie aren't characters at all:  they're real-life people.  The two sets of families and friends grieving the loss of their love ones aren't actors playing a role:  they're real-life people devastated by a preventable, life-altering tragedy.  It's time to get serious.  It's time to demand that the authorities get serious.
Posted by ron kemp at 12:15 AM 6 comments: