"It's going to get worse before it begins to get better".  As the struggle for Equal Rights continues, as predicted, the battle is becoming much more heated.  And, bitter.  And, dangerous.  In just the past 72 hours alone, there's been a major escalation in the verbal and physical attacks on the LGBT community, as well as their supporters.  Sadly, there's been one death. 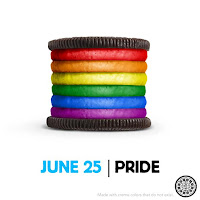 Anyone with access to the Internet, and particularly those who have facebook accounts, are aware of the furor that was caused recently when the makers of the iconic Oreo cookie showed their support for the LGBT community.  In response, the lunatic fringe, LGBT-hating extremists went into full attack mode.  Some of the venomous things they posted as comments brings full light to the dangerous climate members of the LGBT community are facing today.  If you think for a minute that the hatred and intolerance these adults routinely show doesn't have a major impact on the bullying and LGBT teen suicide rate or the level of violence against members of the LGBT community, you're wrong.

Over the weekend, Cory Oden, an LGBT man, was brutally attacked simply because of who he is.  For the simple "crime" of being a gay man in America - the country that's supposedly the "land of the free" - Cory endured a brutal attack that could've very easily claimed his life. Just because he's a gay man in America.  If you get the time, and are so inclined, please do go show Cory some love and support.  Here's his facebook page.  I was reading some of his wall posts moments ago.  This has been a life-changing event for him, obviously.

As I lay here on my porch swing looking at the sky, sorting all the jumble in my brain. I can't stop thinking about all the people in the world suffering. Maybe it be acts of hatred, maybe it be dying loved ones, maybe even just as simple as you don't know how you're going to pay your rent and survive in what seems to be a cold hard world. I've got quite the battle approaching. Everyone knows its a tough one to rise above and conquer. We have to remember to keep the faith and love flowing through our veins. Whatever struggles you are facing, whatever the outcome may be, just remember to always let your voice be heard and make some noise!!! You never know who just may be listening ♥

In Portland, Texas, a lesbian, teenaged couple was found shot in the head.  Nineteen-year-old Mollie Olgin succumbed to her injuries.  It hasn't "officially" been classified a hate crime at the time of this writing.   Of course, that's not to say that it wasn't.

So, there you have it.  In just under 72 hours, one dead, one in critical condition, one in serious condition.  What's my point?  If you go back to the insanity of the attack on the Oreo's ad on facebook, and read the comments, it doesn't take a rocket scientist to figure out that the LGBT community is under attack...that "they" have declared war on members of the LGBT community and its supporters.

Here's the point:  what we're starting to see is a culture that's reaching its boiling point.  The religious fanatics and the homophobic extremists are multiplying rapidly, just as we are on this side of the battle line.  For all of their holiness and deep-rooted "Christian" faith, they're leading us into, essentially, a war right here on our own soil.  Their verbal assaults have been dialed up to fever pitch.  Violence against members of the LGBT community is rising in both frequency and severity.  And, people are losing their lives.

Of course, this mentality isn't anything new in this country.  They killed blacks for sport as they fought for their rights.  Isn't it ironic that these people who profess to be good, "God-fearing Christians" are so comfortable with hatred, intolerance and, worse, the death of those they oppose?  Perhaps, for them, fearing God is in their best interest, after all.
Posted by ron kemp at 12:52 AM 13 comments: