When it hits this close to home, it's really painful for me to think about.  According to information just received, Kenny Wolf, a 14-year-old freshman at Olde Mill High School in Maryland, successfully attempted suicide yesterday, Thursday April 5th.  According to a memorial page set up on the popular teen site, tumblr, Kenny had been constantly bullied because of being an LGBT teen.
The information hit me like a Mack truck.  I lived in that neighborhood for a while.  When I saw his facebook picture, taken just the day before his suicide, I just wept.  No, I didn't know him.  I lived there when he was just 4 or 5 years old.  I didn't need to know him, though.  I know that he was another teen, just trying to become, but because of other people's hostilities, is now gone forever. 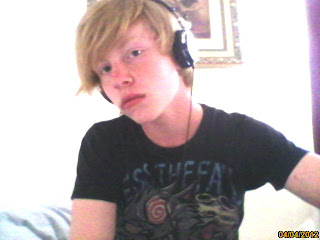 I don't think it can be said enough that this whole epidemic of bullying has to be met head-on, and dealt with as seriously as any other epidemic that hits our society.  It was said that "if teens were dying at this rate because of a medical outbreak, everyone would be in a panic."  I agree.  As such, the same intensity has to be applied to the problem of bullying, and the suicides that it's leading to.
The more I learn, though, the more I realize that it could be easier said than done at this point-in-time.  Why?  Well, where do we start?  The easy answer would be to hold these young people accountable for the consequences of their bullying.  And, I believe that to be true.  If they knew, without a doubt, that their bullying would lead to severe consequences especially in cases where it led to suicides, they would think twice before doing it.  After all, if those same kids were to take a weapon to school and physically harmed or killed another student, wouldn't they be charged for a crime?  And, depending on the severity of the outcome, they would potentially be charged as an adult.  What, then, is the difference between that action and bullying someone to a point where he or she ends their life?  On a real core level, especially to the family and friends of the victim, there is no difference.  In either case, their loved one is gone forever.  However, that's the easy answer.  Our society, especially in this country, already has a lock-'em-up-and-throw-away-the-key mentality.  It doesn't "cure" a thing.  And, it doesn't bring anyone back.
The long-term solution absolutely has to be a re-education of our culture beginning with the adults.  Once again, I will say that these young people aren't born to hate, discriminate, or be intolerance.  They.  Are.  Taught.  They are taught, either directly or indirectly, by adults.  Listen to the rhetoric from the extremist's corner.  Watch, again, what a "pastor" "preaches" to his "congregation" about the LGBT community.  These are the people who tell the young bullies, either directly or indirectly, that it's ok to treat LGBT teens, real or perceived, as mean as they want to.  These extremists send the signal that even physical harm is acceptable when it comes to LGBT teens.  And, that is what has to be addressed quickly, and severely.  Forget their claims of freedom of speech.  Freedom of speech does not include hate speech.  Their idea of "freedom of speech" is costing lives and destroying families.  That is not acceptable.  Not anymore.
Kenny has been gone for just over 24 hours, so his family and friends are still raw with unimaginable pain.  Send them lots of love and support.  And, prayers.  And, while you're praying to a God that loves, pray that He works on the hearts and souls of the people, young and old, who spread harmful hatred and intolerance.  It's time for a change.  Rest in peace, Kenny.  No one can harm you now.
Posted by ron kemp at 11:30 PM 49 comments:

On This Date: Oscar Wilde

Did you know that on this date in 1895, Oscar Wilde was arrested, basically, for being gay?  True.  As the story goes, Wilde had been engaged to the son of the marquess of Queensberry.


Wilde had been engaged in an affair with the marquess's son since 1891, but when the outraged marquess denounced him as a homosexual, Wilde sued the man for libel. However, he lost his case when evidence strongly supported the marquess's observations. Homosexuality was classified as a crime in England at the time, and Wilde was arrested, found guilty, and sentenced to two years of hard labor.

Two years hard labor.  This just goes to show two things:   1.)  unlike what the extremists want people to think, homosexuality has been around for as long as humanity, itself, has.  Wonder who did the "recruiting" back in those days?;  and, 2.)  the LGBT community has always struggled for acceptance.

A four year engagement!?  That's as long, or longer, than many hetero marriages!!  Just sayin'.  For the record, I will add that one of my best friends as a younger man was with his partner (gay marriage wasn't even THOUGHT about in those not-so-long-ago days!) for 17 years!!  Together, they owned a home, operated a successful business, raised a daughter, eventually raised a grandson.  The only thing that separated them was the death of my friend's partner.  Til death do us part.  Yet, we have to struggle to get equal rights to marry!  Go figure.

What struck me as interesting in Oscar Wilde's case is that he was jailed for being a homosexual, but why wasn't the Lord of Queensberry to whom he was engaged for 4 years?  Ah, the privilege of being royalty.

In a bizarre twist, just last year, March 3, 2011, the son of the marquess of Queensberry committed suicide, throwing himself from a fifth floor balcony.  He had been struggling with the sometimes debilitating mental illness, depression.  That just shows that no one is immuned.
Posted by ron kemp at 7:28 PM No comments:

Olivia Penpraze, 19: Bullying and Depression Leads to Death by Suicide

On the Jamie Hubley page that serves as my homepage, one of the regulars posted this yesterday:


I was hoping that i would never have to do something like this but it seems that that time has come. as of 9:20pm 3rd of April 2012 (Melbourne Australia time) a girl by the name of Olivia Penpraze died as a result of a suicide attempt. she was on life support for a number of days and her parents had to make the traumatic decision to turn it off as she was brain-dead. like Jamie, she used tumblr as her escape to post all of her thoughts and messages. she suffered from extreme depression, and it really upsets me that I didn't do anything to help her, even though there probably was nothing I could do.  She will be one of the many teenagers each year that goes unnoticed, not documented, not in the media. but all i hope is that she is in a better place now. it's your time to shine Olivia, we all love and miss you ♥

No, Andrew, she won't go unnoticed.  Not if I have anything to do with it.  I watched the video that she had made, and it just ripped my heart from my chest.  No one, no one should have to live such a life of unchecked turmoil.  Olivia had been screaming for help for almost a decade.  Finally, the demons of mental illness and depression won.  Depression that was brought on by bullying.

Bullying.  Again.  Will it ever end?  Not as long as people keep talking about it rather than doing something about it.  According to a post her father made on her tumblr page, a photo and thought-sharing website used by many teens, people there had been bullying her, as well.  How on Earth does a person sit behind a computer screen and urge a person who is already obviously in crisis to kill themselves?  How does one think that's cool or funny?  Or, do they just truly not care?  Olivia's dad's letter said that this had gone on before she attempted suicide for the last time:


To all of my daughter's followers, this is to let you all know that on Thursday, 29th March, Olivia attempted suicide, as a result she is on life support and this will be terminated shortly due to her being brain dead.  So, to all of the people who posted support of this outcome on this blog, you can be real proud of yourselves.  As a father who witnessed her first breath of life and now to witness her last, I thank you for your utmost disregard for life.  If this sort of activity gets you off, you are nothing.  To those of you who offered her support to refrain from killing herself, thanks.  You should all try to make contact with family even if it is against your wishes.  At least leave a contact somewhere on your blog in times of need.  I know that you all need somewhere you can vent your anger and feelings and that these blogs can help, but in reality family must always come first...

I talked to someone else just tonight, as I was writing this actually, who had someone on that same page telling her that she, too, should kill herself.  Who is teaching these young people such a deep level of hatred?  Is it hatred?  Or, is it simply an ambivalence of human life?  Do today's youth just not give a rat's ass about the next human being?  Have they become desensitized to human life?  Look, it's become painfully and frighteningly clear that the change in our culture has got to start with the adults since that's where young people learn from.  No teen, anywhere, should ever feel so helpless and hopeless that they feel the only way out is to end their life.  At the same time, no teen, anywhere, at anytime!, should feel that it's perfectly okay to bully another person for any reason.  Hatred and intolerance is taught.

When I asked Andrew, the young man who posted the original post about Olivia's lost battle, if he had anything he wanted to say about her, he had this:


she loved her friends and always seemed happy. I remember once at choir she said she was changing schools. That may have been when she quit school like she said in her video. As i have said before, I wasn't close with her.  But, on the outside, she was happy; on the inside, it seems she was screaming for help.  We all miss her, and I personally am going to do everything I can in my power now to put an end to bullying and teen suicide.

We need more Andrews.  Families and friends should now be forced to go through this kind of trauma...this level of pain.  May you rest in peace, Olivia.