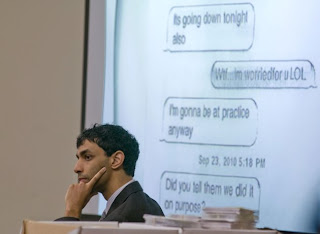 This verdict is in:  Dharun Ravi, GUILTY of hate crime in the Tyler Clementi case.  This arrogant young man had a chance to plea out to a lesser charge, one that would've assured him no jail time, late last year but opted, instead, to take it to trial.  Foolish mistake.  Instead, Mr. Ravi was found guilty on all 15 charges against him.  Sentencing is to come, and he's looking at years.  Tyler Clementi's family was sentenced to life without him on September 22, 2010 because of Dharun Ravi's actions.  He gets off easy. 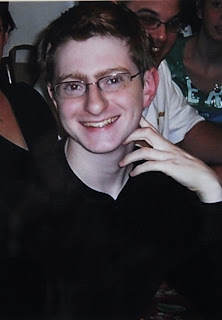 As 18-year-old first-year students at the prestigious Rutgers University, Ravi and Clementi ended up being roommates.  Tyler had just come out to his family as being gay before he left for college.  Once at school, and as Ravi's roommate, he met with a man with whom he'd apparently started becoming intimate with.  Dharun Ravi decided it would be cool to secretly set up a webcam and broadcast Tyler and his partner during their intimacy on his Twitter account.  As a result, Tyler Clementi committed suicide by jumping off the George Washington Bridge.  The case made national, international!, headlines.  It was also one of a flurry of LGBT teen suicides in September 2010 that included Seth Walsh and Asher Brown.

Dharun Ravi, incredibly, was offered a plea bargain December of last year that would've all but set him free.  He would've received no jail time and would've been able to remain in this country.  He declined.  He wanted to argue his case.  He lost.  And, now, he's facing prison time as well as deportation.

In my own opinion, the question that isn't being explored is why was he offered a plea deal in the first place?  Why was the State of New Jersey willing to offer this man much lesser charges with no consequences when his actions led directly to the suicide death of Tyler Clementi?  To me, that's almost as troublesome as Ravi's actions.  Luckily, he had the misguided notion that he could win if only he was able to have his day in court to present "his side" of the story.

"His side" of the story is irrelevant.  A jury told him that today.  Tyler Clementi is gone forever because of Dharun's actions.  Let's hope that this very high-profile case of homophobic bullying, it's tragic results, and now the consequences for the perpetrator sends a message to those who think that bullying is cool or acceptable:  there will be consequences for your actions.

The Clementis suffer the consequences of your actions every single day of their lives, Mr. Ravi.  Now, so will you.
Posted by ron kemp at 6:32 PM 15 comments:

The Rock & The Ripe

I just spent a couple hours going over this project.  Going over this project, familiarizing myself with it, caused me to go back and review some of the videos and stories about people like Phillip Parker, Jamey Rodemeyer, Ashlynn Conner, Seth Walsh, Jamie Hubley.  The list is sickeningly long.  Then, I cried.  With every different face I saw, I cried.  Then, I got mad.

I watched videos that reminded me just how important this all is because there are actually people, and I mean high-profile people, working just as hard to minimize or even eradicate everything we're doing.  To them, bullying isn't a problem; LGBT teens shouldn't have "special protection"; LGBT teens bring their problems on themselves by being out.  Thank the God of your understanding that we outnumber them.

I named this blog Enough is Enough for a very specific and obvious reason.  Our society has been plagued long enough by narrow-mindedness, ruled too long by a "moral majority" (which , by the way, they're neither) who feel that everyone should live by THEIR standards or be damned.  And, in the cross hairs are struggling, emotionally fragile LGBT teens.  And, the result is far too often...suicide.  Enough TRULY is enough.

In watching the video promoting The Rock & The Ripe, one segment stopped me in my tracks.  I watched it repeatedly.


So, don't be f*cking shocked and wonder where all these bullies are coming from that are torturing young kids and are driving them to kill themselves because they're different.  They learned it from watching you.

Watching those videos got me angry.

Mark Blane is 23-year-old gay man who was bullied unmerciful as a teen.  He is also a very talented director and playwright.  He is inspired and inspiring.  He's assembled, in his words, "...an incredible network of artists, actors, and activists..." in his effort to "...expose the secrets and real issues behind gay [teen] bullying in America."

"The Rock & The Ripe" the play, is set for production in Chicago June 1st, 2nd, and 3rd.  Mark's ambition is to get the funding to take it nationwide.  He's going to need massive help in doing so.

"The Rock & The Ripe", the book, goes into deeper detail.


The book will be a dissection of how this process and project came to be, the atrocious facts and stories of anti-gay bullying from across the country, information commemorating the lives of 14-year-old Phillip Parker, 14-year-old Rafael Morelos, and many others. Direct quotes from phone-calls, in-person interviews in communities across the country that are affected by homophobia, ignorance, careless town officials, and unsympathetic and uneducated (ironically) school administrations. This book will be PACKED with photography, research, plus insight into the the minds of the actors/activists.

Enough really is enough.  Our numbers are growing around the world, and our voices are being heard.  People young and old, black and white, gay and straight, and everywhere in between, are standing up and saying enough is enough!!!  And, we are making a difference. The reality of it is we're going to have to create the change we're seeking.  The politicians won't do it.  The educators won't do it.  And, too many parents won't do it.  WE are the ones who will make the difference at the end of the day.  Mark is doing his part at trying to make a differnce.  He needs help getting his project up and running.

He's created a Kickstarter page for people to contribute as little as $5 towards getting his story out.  If you're unfamiliar with how Kickstarter works, it's an all-or-nothing proposition.  Anyone can contribute.  There's a set target amount.  Anything at or above that amount, Mark gets for his project.  However, if that number isn't met, he - and, the project - gets nothing.