4-Year-Old Sings "Ain't No Homos Gonna Make it to Heaven": Planting the Seeds of Intolerance

It's getting increasingly hard to keep religion out of my talk about the intolerance and hatred that leads to bullying.  I think today's latest episode takes the cake. 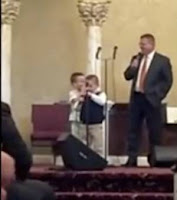 At the Apostolic Truth Tabernacle in Greensburg, Indiana, a congregation and its leader, watch and listen as a 4-year-old boy - A 4-YEAR-OLD BOY!!! - sings the words he's been taught:


Ain't no homo gonna make it to Heaven.

When you watch and listen to the video, it's actually hard to discern what this toddler, TODDLER, is saying.  He is, after all, 4-years-old!  However, when he reaches the climatic line of the song, his words ring crystal clear.  That's good coaching.

Outrage doesn't even begin to describe my emotion right now.  I'm sure that those one "the other side" of this great debate will argue that parents have the right to teach their young as they choose.  However, teaching intolerance at such a young age should be criminal on some level.  I'm entitled to my opinion.  Listen, Greensburg, Indiana is the city where Billy Lucas was bullied to his death for being perceived as being gay. 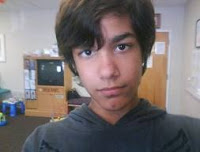 Did the Apostolic Truth Tabernacle rejoice in his death?  The kids who were responsible for bullying Billy until he couldn't take it anymore were groomed by people just like this!!!

A four-year-old has no idea what a "homo" is!  Nor should he.  So, why is he being taught to be intolerant towards them.  Can he even successfully recite his ABCs?  Can he successfully count to 100?  I don't know that answer.  I do know that he can stand in front of the "church" congregation and sing the words "ain't no homo gonna make it to Heaven".  And, that's beyond repulsive.

Shame on the Reverend Jeff Sangl for "preaching" hatred and intolerance in a place where the message is supposed to be one of love and acceptance.  Shame on a congregation that comes to their feet in a standing ovation as this toddler sung those words of intolerance.  In listening to the video, you can hear the good reverend saying "that's my boy!!!" as the toddler finished singing.

The world is watching as America finally begins to show its true colors.  "Christian nation"?  Hardly.  God is love.  That's written in that book they like to cherry-pick verses from and twist to fit their own bigotry.  Jesus Christ, according to their book, came to spread the good news of God's omnipresent love and acceptance.  How in the hell did it get twisted to the point where it's now a haven for bigotry, hatred, and intolerance!!??  Anyone who can answer than and figure out how to turn that misguided ship around will, no doubt, win a Nobel Peace Prize.  Meanwhile, the world truly is watching, while shaking their heads in disbelief, as the religious fanatics of this country continue to make a mockery of God and religion.  The unfortunate thing is the casualties of their war are young people.  Shame.

Boy, 10, Has Arm Broken by Bullies

The good news is not only is he alive, but he's in great spirit.   The bad news is we're seeing far too much of this today.  One would think that, during a time when just the mere word "bully" is a dinner table topic, we would be beginning to see a decline in the incidences of bullying.  Think again.  It seems as if some are even emboldened by the fact that they're actions are being talked about daily by millions.  That doesn't make the job any easier. 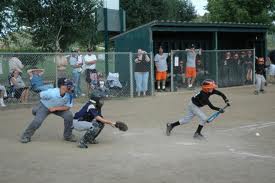 Ten-year-old Theo Reed was attacked by two same-aged boys as he watched a youth league baseball game at the neighborhood field.  According to Theo, they threw objects at him until, eventually, one boy held him down as the other one twisted his arm until it broke.


"I was laying down screaming, crying for help and nobody would come,"

Apparently, young Theo didn't know his attackers as his mother is pleading for someone to come forward with information about the two boys.

This raises the question of how is it that incidences of bullying are continuing to escalate at a time when bullying, itself, has national and worldwide attention?  Within the answer lies the problem:  We're seeing this issue continue, and even escalate, because it still isn't being taken seriously.  The "boys will be boys" mentality still breathes within our society.  Reports of bullying are still being swept under the carpet.  Worse, too many people are seemingly waiting for somebody else to step up and do something about it.  No one wants to get involved.  In some cases, school administrators at the teaching level are threatening with termination if they report bullying incidences.  Get the picture?  The problem is so pervasive, so entwined in who we are as a society, the people who can make a difference are steering clear of it.  Hence, the constant blank party-line response, especially in the cases of teen suicides, of "our investigation has shown that no bullying has occurred."

So, where do we go from here?  How do we rid ourselves, our society of the menacing "boys will be boys" mentality as it pertains to bullying?  When we see in the media where people who are held responsible for bullying, and bullying that have led to suicides!, criminally charged only to get their wrists slapped by the justice system, we see how this issue perpetuates.  The clear-cut message that sends is that bullying others is alright.  And, guess what?  The young people who do the bullying are definitely watching.  They are getting the message loud and clear.  And, the beat goes on.

Theo is mending well and will be just fine, no thanks to the boys who attacked him.  Our focus has to be on finding a way to prevent this from continuing to happen.  The next "Theo" may not be as lucky.
Posted by ron kemp at 11:17 AM 2 comments: