I mention Wipeout Homophobia on Facebook many times in my writings.  That's for good reason.  No, I'm not a paid "pitch man" for them.  I'm simply overwhelmed, like nearly 400,000 other people!, with the amazing job they have done and continue to do.  Just another facebook page?  Forget about it.  I have no idea what the official count of "group" pages on facebook is today, but I'd bet it's well into the millions.  However, smart money would bet that not one of these pages has anything close to the powerful, positive effect on people's lives that Wipeout Homophobia on Facebook continues to have daily.  One man's opinion.  They have easily become the "go to" page on facebook.  Indeed, its members includes gays and straights; christians and non-believers; suicide survivors and families and friends of those we weren't able to keep.  It's not "just another facebook page":  Wipeout Homophobia on Facebook is a real, true-blue, loving and caring and sharing community.

Sometime within the next 24 hours, they will get their 400,000th member!  That's phenomenal, especially considering when I became a member back in the fall of 2011, the membership count was in the 35 thousands.  Do the math.  That's astronomical growth.  And, it can be said with 100% certainty that the growth they continue to experience has everything to do with how they affect people's lives.  The word is out.

If the roots are traced back far enough, you'd know that this very blog is an indirect product of Wipeout Homophobia on Facebook.  I became a member in the early fall of 2011.  Shortly thereafter, they posted "We failed another gay teen".  I followed that link to read the story of the Jamie Hubley event.  The Jamie Hubley tragedy pushed me off the fence and made me want to get more involved.  I started this blog, a blog that, according to one of the members of the facebook blog page, is displayed daily at his college.  This community is massive, it's growing daily by leaps and bounds, and it's being led by Wipeout Homophobia on Facebook.

There's no better testament to the job their doing than to take a look at the hundreds upon hundreds of letters they receive from their members.  Because of the efforts of one page, actually one person with a very broad vision and a mountain of determination, suicidal people have stepped away from the proverbial edge: 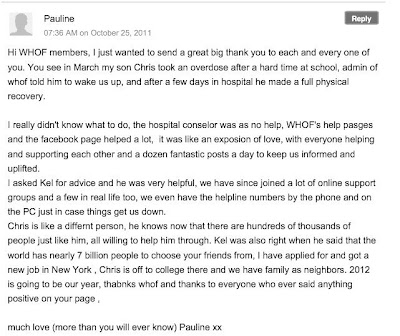 They have gained to courage to come out of the closet and live healthy, normal lives:

And, they've created an environment for people, young and old, LGBT and straight, of all races to come and just celebrate life, cheer each other on, or just absorb information: 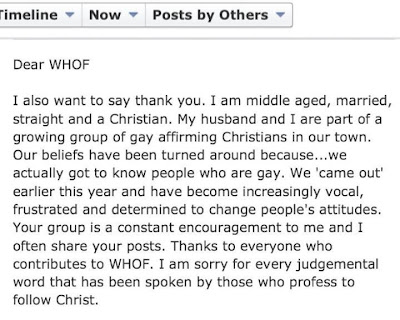 There's truly something there for everyone!  They're saving lives, celebrating lives, nurturing those who need support and courage, and educating those who need more information.  Isn't that what a true community is supposed to be about?
Posted by ron kemp at 3:04 AM 4 comments: